Home » Reflections from the WQE Chair: On winning an Award … and five-years as Chair

Reflections from the WQE Chair: On winning an Award … and five-years as Chair 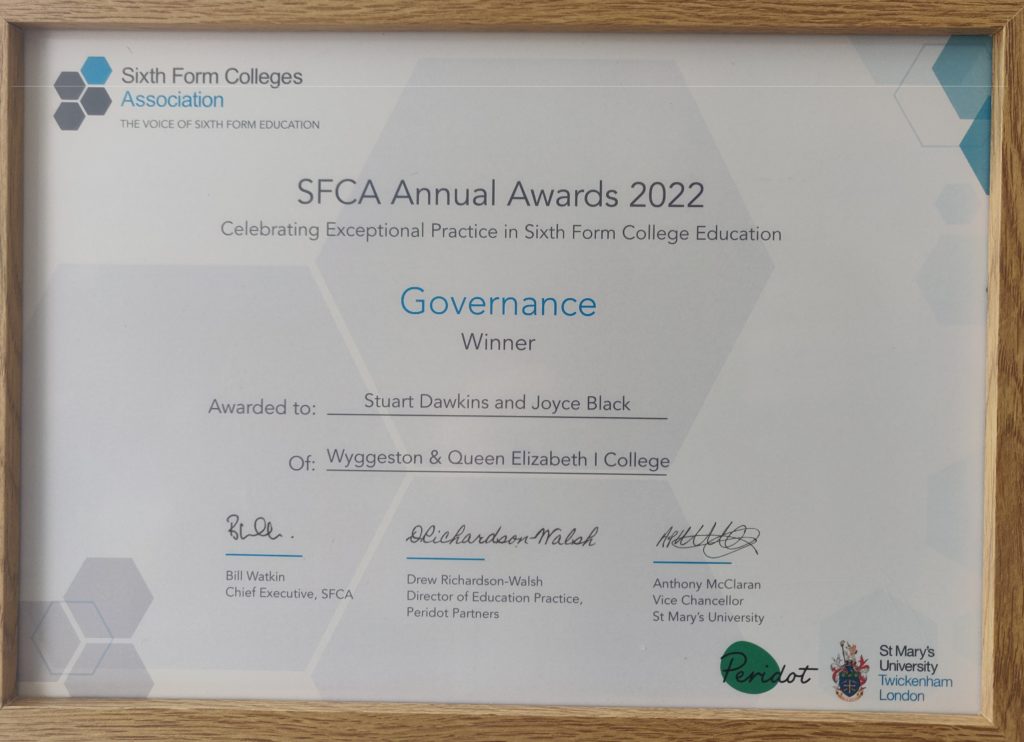 At the end of June, I Chaired a WQE Corporation meeting for the last time.  I had agreed to write a piece for the College website about my five-and-a-bit years as Chair.  Instead, and with great pride, my piece can now be about an award which reflects the hard work of so many people across the College!

Just before the meeting, and unbeknown to me, the Sixth Form College Association 2022 Award for Governance had been awarded to me and to our Vice Chair, Joyce Black – recognising service and achievement in support of the educational needs of Leicester.  We were both surprised and delighted to be recognised in this way.

By March 2017, it had been agreed in principle that WQE and Regent Colleges would merge.  Immediately before that process began, the Chair had a change of job and resigned from the College.  I remember well the resulting call from Sandra – then Principal of WQE – informing me of this and asking whether I would be prepared to take the role of Chair and, inter alia, steering us through the merger process.  I said that I would be honoured to do so.  It has been quite a five years.

Merging two Colleges takes a lot of time and effort, and this includes far more than usual time and effort at Board level.  Successfully steering us through that whilst also getting myself more immersed in the specific requirements of education and a thriving Sixth Form College was a challenge, but one I thoroughly enjoyed.

As well as the merger, the immediate task also included getting back the ‘Good’ Ofsted rating which we had lost in 2016.  Thanks to the effort of pretty much everyone associated with the College, we achieved that, seven months after I took over as Chair – the first of many proud moments.

A vital aspect of any merger is the harmonisation of two organisations into one.  This always takes time, typically measured in years rather than months.  What was particularly rewarding to me was that the harmonisation process for the new, joint, Board of Governors took place really quickly.  I can thank Joyce, as Deputy Chair and ex-Chair of Regent College, and all of the members of the Corporation for that.

Then came Covid… I do not remember a time when the rules of the game changed so often, so belatedly and, at times, so seemingly randomly as they did for education during the pandemic period.  The College dealt with those challenges brilliantly and the Corporation continued to do its role effectively.  Our collective efforts and achievements during that period will remain another source of great pride.

The timing of our recent Ofsted was, through serendipity, perfect for me.  Ofsted should visit a newly merged college within three years, but the pandemic meant their schedules slipped.  We were fairly confident that the College’s ‘Good’ rating would be retained, but as we all know, an Ofsted inspection is an Ofsted inspection…

We were, again, delighted with the resulting report; even more so as it reflected the immense work done by the College as part of harmonisation and managing through the Pandemic.  We were told that mergers most often result in colleges going backwards in their next inspection.  The tone and content of our Ofsted report showed the opposite: clear progress.  This is a great position for me to hand over to my successor, Philip Parkinson.  Philp has been an incredibly dedicated and supportive Governor and will, I am sure, Chair well and help drive the College forward towards ‘Outstanding’.

So, what are my lasting thoughts from those five-and-a-bit years?  All of the formal achievements listed above, of course, but other things too.  For example, the considerable investment in our Estates leading us ever closer to our vision of having a ‘campus’ for each subject area.  An ever-increasing focus on student welfare and support is high on the list, too.   One anecdote springs to mind:  one of the early phases of our Estates plan included providing Student Welfare accommodation on the Regents Road site akin to that already in place at University Road.  I had undertaken a Governor visit to Student Welfare in University Road about a week before the pandemic lockdown began.  A couple of years later, I was making a Governor visit to our Media & Creative Arts department when I wandered over to a table of students in the G Block café area to chat.  One of those students praised the support she had received from the College for her Mental Health needs, saying how great it was that she could access resources at University Road – where she was primarily based – but also go away from that area for Counselling sessions at Regent Road.  I thought “Yes! We did that and I actually signed the Deeds to make it happen”.  It was, I admit, a lovely personal moment.

And my memory will be of the remarkable team we have at the College.  The Corporation, the Executive Leadership Team, the Curriculum management, the teaching staff, the support staff, the various partner organisations who help us deliver for our students.  All of them working hard to provide the best possible environment for the 3,500+ students who are in our care each year.  The relationship between Chair and Principal is vital, and Paul has been an exemplary Principal in that relationship, as well as providing a regular, well-informed level of chat about our beloved Leicester City Football Club.

My father was a scholarship student at the old Wyggeston Boys School in the 1940s.  Both my daughters attended WQE.  I walk past the College most days of my life.  When I put on the old Wyggy Boys cufflinks I recently inherited from my late father for my final meeting as Chair, I hoped that in my five-and-a-bit years I had played some constructive part in providing a great experience for those students.